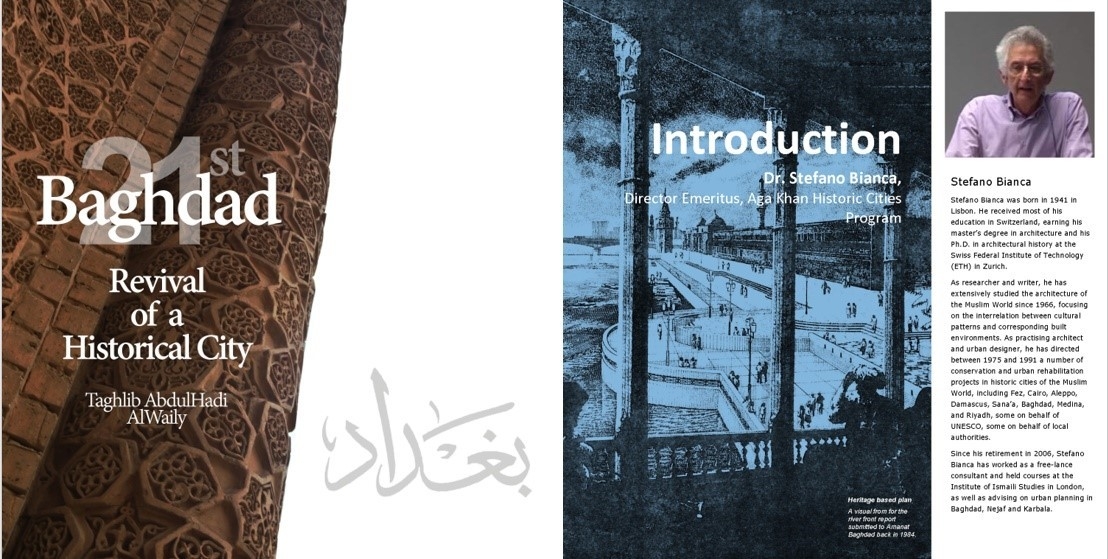 Stefano Bianca
Stefano Bianca was born in 1941 in Lisbon. He received most of his education in Switzerland, earning his master’s degree in architecture and his Ph.D. in architectural history at the Swiss Federal Institute of Technology (ETH) in Zurich.
As researcher and writer, he has extensively studied the architecture of the Muslim World since 1966, focusing on the interrelation between cultural patterns and corresponding built environments. As practising architect and urban designer, he has directed between 1975 and 1991 a number of conservation and urban rehabilitation projects in historic cities of the Muslim World, including and Riyadh, some on behalf of UNESCO, some on behalf of local authorities.
Since his retirement in 2006, Stefano Bianca has worked as a free-lance consultant and held courses at the Institute of Ismaili Studies in London, as well as advising on urban planning in Baghdad, Nejaf and Karbala.

The name of Baghdad evokes a period of political and cultural glory under the early Abbasid dynasty, when the city was the focal point of the young Islamic empire. The spirit of that period is incorporated by legendary figures, such as Haroon ar-Rasheed and others, who have been immortalized in the tales of 1001 Nights. However, besides literary reminiscences, no physical traces have remained of the early capital on the Tigris. To make things worse, the Mongol invasion of 1258 A.D. wiped out most of the remains of historic Baghdad from the later Abassid period.

Urban resurrection under new auspices was achieved in the 13th century through the Seljuk dynasty, when a new walled district of the name of Rusafa was established that today is still identified with the historic core of Baghdad. Besides regaining some of its former commercial importance, Rusafa also resumed some of Baghdad’s former intellectual radiance, thanks to the Nizamiya Madrasa, whose greatest teacher has been Muhamed al-Ghazali (1056-1111), one of the leading thinkers of the Islamic world.

While it could no longer compete with other emerging capitals of the Middle East, such as Cairo, Isfahan and Istanbul, Rusafa remained an important provincial centre and cultural hub of the Mesopotamian region until the late days of the Ottoman Empire, which for a short period were followed by British colonial rule. It was at that time, in the early 20th century, that the first urban redevelopment schemes were introduced with the construction of Rasheed Street (1914), a few decades later followed by Khifa Street and the much more aggressive incision of Khulafa Street. The sum of these interventions eventually meant that the modern expansion of Baghdad did not occur adjacent to or outside of the historic core (as was the case in many other old cities of the Islamic World), but in fact was carved out of the pre-existing urban fabric. This superimposition between two very differently conditioned urban systems became increasingly destructive, particularly at the time of Saddam Hussein, when massive urban redevelopment became a tool for establishing an excessively ambitious modern metropolis intended to enhance the prestige of a totalitarian regime.

The old Rusafa Conservation Project commissioned by Rifat Chadirji in 1983/1984 to a team of foreign consultants represented an attempt to control and mitigate the negative impact of a number of modern redevelopment schemes on the historic core of Baghdad. Its aim was to find a balance between old and new, recognizing that the historic quarters of Rusafa, in spite of the appeal of modernist insertions, still remained the principal dispenser of cultural identity for Iraq’s rapidly growing capital. However, due to the well-known political, institutional and economic problems of the subsequent period, the conservation plan could not be implemented, and the situation in Rusafa has deteriorated dramatically: On the one hand, many of the ambitious redevelopment plans have never been completed, and, on the other hand, neglect, abusive occupation and irregular building activities have further eroded the substance of the historic districts. As stated by the surveys of the present study, more than 60% of historic structures identified in the 1984 report have vanished since then. New commercial production and distribution
environment, and former residential quarters are under heavy threat. Thus, it is no exaggeration to state that today the very survival of the cultural memory of Baghdad is at stake. Indeed, extrapolating the current trends into the future, it can only be expected that soon – like in the case of Abbasid Baghdad – the last physical traces of old Rusafa will have disappeared, or will have to be cleared because they are no longer sustainable.

In this situation it is recomforting to see that a new concept for salvaging and revitalizing the historic city centre of Baghdad, led by a group of committed local architects and planners, has emerged at the eleventh hour. The ideas and proposals presented in this book combine the conservation and re-use of surviving historic landmarks with adapted urban renewal of dilapidated urban structures. Rather than isolating and fossilizing single monuments, they integrate them into a vibrant contemporary context that provides a link with significant age-old urban traditions. Re-establishing the continuity of the old suqs, rehabilitating ruined plots, protecting the architectural homogeneity of Rasheed Street, reclaiming the environmental and convivial qualities of the old riverfront and restoring and re-using important historic houses - such are the key elements of this new plan that provides a solid pilot project for the strategically most important sections of Rusafa, and may later be extended into neighboring areas.

While some details of the plan will have to be studied and resolved during the following stages of work, its outstanding merit consists, first of all, in projecting a coherent vision of desirable future conditions – a vision that should act as a springboard for coming implementation, by mobilizing public support and by convincing the Authorities of the anticipated benefits and the urgency of corresponding action on the ground. Materializing this plan may then become a subject of national pride and high priority uniting the various stakeholders.
As a professional who has been involved in the earlier (1984) plan for Rusafa, it is my sincere hope that the City of Baghdad will seize this opportunity – most likely the last one left – in order to save what remains of its historic centre, and to revive its cultural, architectural and social potential for the sake of future generations of citizens and visitors alike.